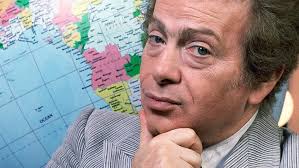 Comedian Jackie Mason, who has been called “one of the most famous funnymen of all time,” has died at the age of 93.

The New York Post reported Mason died Saturday at Mount Sinai Hospital in Manhattan, New York, with his wife Jyll and a few friends by his side.

All of the top comics alive recognize Jackie as “the best.”

That goes for the dead comics too. “Ba-dum-bum.”

Mason was born as Yacov Moshe Maza in Sheboygan, Wisconsin, to Jewish parents who immigrated to America from Belarus. His family moved to the Lower East Side of Manhattan when he was 5 years old.

He became a Broadway sensation in the 1980s with his one-man show, “The World According to Me!”

A ferocious conservative on stage, and an adamant conservative behind the scenes, Mason, who wrote occasional columns for WND, was fearless in mocking the biggest names in politics and media.

During a radio interview with former WND Jerusalem Bureau Chief Aaron Klein, Mason targeted Hillary Clinton, slamming her as the “biggest faker in the whole history of politics. And how she became such a hot candidate for president makes as much sense to me as Al Capone becoming the biggest crime fighter in America.”

Referring to her as “this yenta,” Mason said Mrs. Clinton “made her whole life stealing money from everybody everywhere in the world. The fact alone that she is still a free person out of jail is unbelievable.”

He continued: “Every single day they are caught with money they never even knew they had. Imagine that every time you make money you never find out about it? How do you make all that money that you don’t find out about? They send you money for nothing and somehow you didn’t even ask for it, you never worked for it, you never heard about it and all the sudden it’s in your pocket. You don’t know how it got there.”

“You know why she only wears pantsuits?” asked Mason.

I have enough money to last me the rest of my life, unless I buy something. I was so self-conscious, every time football players went into a huddle, I thought they were talking about me. My grandfather always said, “Don’t watch your money; watch your health.” So one day while I was watching my health, someone stole my money. It was my grandfather.

“Victory goes to the player who makes the next-to-last mistake.”

It is more profitable for your congressman to support the tobacco industry than your life.

I have nothing but love in my heart and everything I say is just an instrument for laughs.