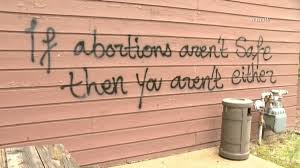 (Updated June 21, 2022, see below).
Radical pro-abortion group ‘Jane’s Revenge’ has declared open season on pro-life clinics, describing in a letter posted this week how “easy and fun” it is to attack such clinics after claiming responsibility for a string of vandalism and arson attacks.

The attacks, mostly lodged at Christian faith-based pregnancy crisis centers, have taken place over the past few weeks in the wake of the leaked Supreme Court draft opinion suggesting the court is poised to overturn Roe v. Wade.

Clinics have been tagged with various  renditions of the messages “Jane’s Revenge” or “If abortions aren’t safe, neither are you.”

What we are witnessing are the very “flaming arrows of the evil one,” spoken of in The New Testament’s Book of Ephesians, chapter Six. 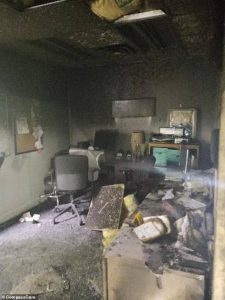 This photo is from the Compass Care, a Christian pregnancy center in Buffalo, New York that was firebombed on June 7.

The statement also demanded “the disbanding of all anti-choice establishments’ within 30 days,” and states that its first attack was “only a warning,” but there will be future attacks until “the inalienable right to manage our own health is returned to us.”  The group claims to have a presence across the United States that could launch further attacks.

If Roe is overturned, prepare for these acts of pure evil to pivot towards church buildings.

Should this occur, it will be a defining moment. Not all such buildings will be attacked, but only the ones known for being places of worship and gathering for followers of Jesus who are unabashedly serious about their faith and the saving power of God’s Word, the Bible.

It will also be a defining moment for church leadership: will pastors preach the full Word, or will they dance around the edges in order to not make waves?  This is not a stretch given the fact that there are so many churches today who refuse to address what the Bible has to say about, oh, say for example: sexuality, real marriage, fatherhood, morality, and the “S” word (sin).

If the pastors of these churches won’t go there now, they’ll never bring up the “A” word (abortion).