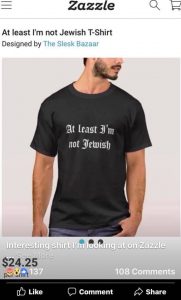 For those of us who are Jewish, it’s certainly a new spin on the most ancient enmity.

A shirt being sold in the “hot trending” section of a popular online retailer bears the slogan: “At least I’m not Jewish.”

Fortunately, Zazzle.com removed the shirt which was being marketed by a third-party vendor who used the moniker, “The Slesk Bazaar,” who has since been banned by Zazzle.

That same vendor also created a shirt that read, “At least I’m not Christian.”

After Satan tempted Adam and Eve in the Garden we read in Genesis 3:14-15 that God put enmity between Satan and his ilk, and Eve and her offspring.  Ever since, Satan has been going after God’s Chosen people (initially in an attempt to prevent the Messiah from being born), and authentic followers of Yeshua (Jesus).