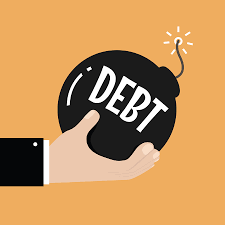 Yes, our national budget deficit continues to rise.  But to listen to the democrats and their mouthpieces in the media, the debt is Donald Trump’s fault.  Take for example this article from The Hill:

Two and a half years into his term, President Trump has little to show for breaking with erstwhile Republican Party orthodoxy on trade and budget policy.

Indeed, far from delivering on his promise to cut America’s trade deficit, Trump has presided over a ballooning deficit that’s on pace to be some 25 percent higher than when he took office. This is happening at a time when the budget deficit is widening and the country’s public debt is well on its way to exceeding 90 percent of GDP.

Sadly, the Trump administration seems unfazed by the country’s deteriorating long-run financial position. It shows no indication of correcting policy course to put the economy on a sounder long-run economic footing.

Too bad Mr. Trump is not able to run the government’s budget the way he ran his various companies as a businessman.  You see, in the swamp (aka, Washington D.C.) budgeting is conducted with a slimy little trick known as “baseline.”

Baseline budgeting is one of the most sinister ways that politicians claim to cut spending when they are actually increasing spending.

The baseline includes automatic adjustments for inflation and anticipated increases in “program participation.” Program participation is swamp for how many people are supposedly served by whatever a federal department provides. Baseline budgeting builds automatic, future spending increases into Congress’s budgetary forecasts.  In other words, every department in the federal government gets an automatic raise every year.  It also tricks the public in favor of big-spending politicians.

For example, if an department’s budget is projected to grow by $100 million, but only grows by $75 million, according to baseline budgeting, that agency sustained a $25 million cut. That is kind of like a person who goes on vacation and expects to gain ten pounds, but only gain seven pounds, and then tells everyone they lost three pounds on vacation.

Government is the only place this absurd logic is employed.

Oh, and one more thing: when a federal agency is coming up with a financial surplus toward the end of the year, what do they do?  They spend every dime in the name of “use it or lose it.”

Politicians often like to have it both ways. Baseline budgeting gives politicians an opportunity to deceive taxpayers by allowing them to claim that they are holding the line on spending while providing more government services.

Eliminating the inflated budget baseline will force Congress to justify and account for increased spending instead of hiding behind automatic increases. It would also greatly aid in reducing our massive federal debt.