No Crisis at the Border? Check Out These Troubling Statistics 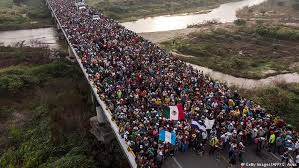 And the liberals contend there is no crisis at the border?

ICE has already released 168,000 illegal immigrant family members into the U.S. this fiscal year (which began October 1, 2018), and the number is likely to surge higher according to a top deportation official who addressed Congress on Wednesday.

Further troubling, a staggering 87 percent of released families are skipping their court hearings, leaving judges to order them deported in absentia.  Worse yet, the government is ill-equipped to track them down.

Nearly 110,000 were nabbed at the southwestern border in April, including nearly 100,000 caught by the Border Patrol trying to sneak into the U.S. The other 10,000 were encountered when they showed up at ports of entry demanding to be let in, despite lacking permission.

Still more troubling is the number of illegal immigrants traveling as families, which neared 62,000 in April alone. That shattered the all-time monthly record and represents a doubling of the number from just three months ago.

That surge is being fueled by ridiculous U.S. policies, particularly a 2015 court ruling that allows illegal immigrant parents who travel with children to be released within 20 days. That’s too little time to complete a court case, meaning the government has no choice but to set the families free, hoping they’ll return for deportation hearings.

“They have received the message loud and clear: bring a child, you will be released,” said Carla Provost, chief of the Border Patrol.

Another troubling statistic: a staggering 1 percent of the populations of Guatemala and Honduras have made the journey north to the U.S. and jumped the border in just the past seven months, acting Homeland Security Secretary Kevin McAleenan said this week.

Assuming the trend continue, that number will be 2 percent by the end of this fiscal year.

Sen. Richard J. Durbin, Illinois Democrat, said the problem is not  illegal immigrants but rather U.S. drug consumption, sales of weapons, and the cash that flows into the Central American countries, fueling violence there.  He also blamed President Trump for fueling the chaos, saying his upheaval at Homeland Security has left the department spinning, with four heads of the department so far.

The senator also said there is “zero evidence” that the 2015 court ruling is a factor in the surge.

The experts told him that just wasn’t so.

Meantime,  authorities in the northern Mexico border state of Tamaulipas say they have detained 289 Central American migrants, including some children with measles and other illnesses.

The Tamaulipas state government says the migrants were found crammed into the freight compartments of two tractor-trailer trucks.

Authorities had to punch a hole in one of the freight containers to free the migrants, who had been transported from the Gulf coast state of Tabasco toward the U.S. border.

Some of the children were also found to have chickenpox and “other diseases.”

Nothing to see here, folks.