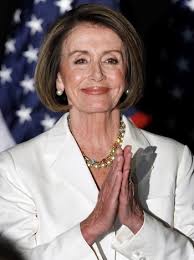 Wake up, friends.  Nancy Pelosi may be a Catholic, but she’s no Christian.  I’m not judging where she’ll spend eternity, I’m just saying her actions are NOT in keeping with the teachings found in the Bible.

What the Speaker of the House is into is not only sickening, but unholy.

Here’s the story: last year in Ohio, a judge removed a biological girl from her parents’ custody after they declined to help her “transition” to male with testosterone supplements.  The Cincinnati Children’s gender clinic [God, help us] recommended these treatments for gender dysphoria (the condition of being distressed with one’s biological sex).

When the girl’s parents wanted to treat her with counseling instead, the county prosecutor charged them with abuse, while transgender activists and pro-trans medical doctors compared their decision to denying treatment for cancer patients.

All of this took place at the state level, without federal legislation.

But now, one of House Speaker Nancy Pelosi’s top legislative priorities, the Equality Act, politicizes the medical and psychological treatment of gender dysphoria and will lead to more prosecutions against parents who refuse to aid in the unnatural sexual transformation of their children (which includes as a side effect, sterility).  As more doctors will recommend that children take puberty blockers at age 11, cross-sex hormones at 16, and undergo “sex-reassignment” surgeries at 18.  Parents who resist could face charges of child abuse and lose custody of their children.

The tragedy in Ohio could be repeated in families across America.

Some states, like California, have already passed laws similar to Pelosi’s Equality Act.  Transgender activists have sued Catholic hospitals for “discrimination” on the basis of gender identity because they wouldn’t perform sex-change surgeries for patients with gender dysphoria.  It’s also illegal for a state licensed psychological therapist to council a person who is questioning their sexuality.

The transgender movement is the devil’s way of robbing boys, girls, men, and women of their God-given, divinely created, identity.

Interestingly, for now the American Psychological Association’s manual of mental disorders classifies gender dysphoria as a mental illness.  Research shows that 75 to 95 percent of children with gender dysphoria who go through puberty without any transgender treatments eventually become comfortable with their bodies.

Expect that classification to be scrubbed from the record very soon.