The Radical Muslim Congresswoman and Her Blatant Lies About Israel 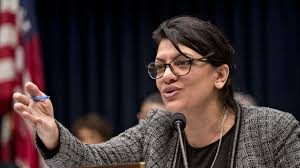 Michigan Congresswoman Rashida Tlaib has made yet another shocking and ignorant claim: thinking about the Holocaust gives her a “calming feeling” because her Palestinian ancestors provided a “safe haven” for Jewish victims of the tragedy.

On a podcast she said,

“There’s always kind of a calming feeling I tell folks when I think of the Holocaust, and the tragedy of the Holocaust, and the fact that it was my ancestors — Palestinians — who lost their land and some lost their lives, their livelihood, their human dignity, their existence in many ways, have been wiped out, and some people’s passports. And just all of it was in the name of trying to create a safe haven for Jews, post-the Holocaust, post-the tragedy and the horrific persecution of Jews across the world at that time. And I love the fact that it was my ancestors that provided that, right, in many ways. But they did it in a way that took their human dignity away and it was forced on them.”

What an idiot. Her last line reveals her twisted heart: apparently her “ancestors” (meaning her Islamist cousins) were somehow “forced” to behave in a benevolent fashion towards the persecuted Jews.

Besides that, she is purposely avoiding the historical facts:

Tlaib’s claims are void of ANY truth.

Nancy Pelosi should censor this fanatic, if not, any Jew (or authentic Christian) who continues to vote Democratic is committing political suicide.