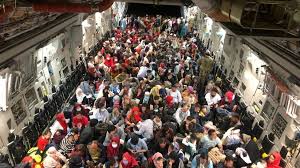 The absolutely shameful Afghanistan evacuation is even worse than imagined.

Why the Biden administration didn’t make getting US citizens out of Afghanistan their first priority is immoral.

And why we would take Afghans who weren’t properly vetted is plain stupid.

Check out this story from the Associated Press, hardly a right wind outfit:

U.S. officials are looking into reports that in the frantic evacuation of desperate Afghans from Kabul, older men were admitted together with young girls they claimed as “brides” or otherwise sexually abused.

U.S. officials at intake centers in the United Arab Emirates and in Wisconsin have identified numerous incidents in which Afghan girls have been presented to authorities as the “wives” of much older men. While child marriage is not uncommon in Afghanistan, the U.S. has strict policies against human trafficking that include prosecutions for offenders and sanctions for countries that don’t crack down on it.

One internal document seen by The Associated Press says the State Department has sought “urgent guidance” from other agencies after purported child brides were brought to Fort McCoy in Wisconsin. Another document, described to the AP by officials familiar with it, says Afghan girls at a transit site in Abu Dhabi have alleged they have been raped by older men they were forced to marry in order to escape Afghanistan.

God, please have mercy on this country. Most of us did not vote for Joe Biden.
Posted in Category: Commentary, News, Tagged: