The Latest Crisis at the Border: Child Recycling 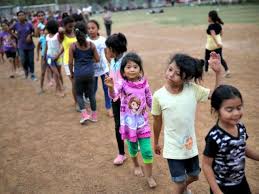 The numbers of unauthorized border crossings are surging this year, with new records being set monthly for the number of families entering the U.S. outside legal points of entry. Most are from Guatemala, El Salvador, and Honduras, and many adults and children who cross successfully seek asylum under U.S. law.

Others are simply caught, briefly detained, and released.

The Border Patrol has warned that its holding facilities are past capacity and that it doesn’t have the staff or resources to detain migrants; immigration agencies are releasing families within a day or two to clear detention space.

In one case filed in federal court in El Paso this month, authorities accused a Guatemalan man of having a fake birth certificate printed that claimed he was the father of a teenager who crossed the border illegally with him. Authorities say the teen agreed to go with the man because he wanted to leave Guatemala. They could not confirm the teen’s age.

The Border Patrol says that in the last year, it’s stopped roughly 3,100 adults and children fraudulently posing as families so they can be released into the U.S. quickly rather than face detention or rapid deportation.

The Department of Homeland Security has also warned of “child recycling,” cases where they say children allowed into the U.S. were smuggled back into Central America to be paired up again with other adults in fake families — something they say is impossible to catch without fingerprints or other biometric data.

“Those are kids that are being rented, for lack of a better word,” Porvaznik said.

But the Border Patrol has not publicly identified anyone arrested in a “child recycling” scheme or released data on how many such schemes have been uncovered. Advocates say they’re worried that in the name of stopping fraud, agents might take personal information from children that could be used against them later.

“Of course child trafficking exists,” said Karla Vargas, an attorney with the Texas Civil Rights Project. But she warned against implementing “a catch-all” policy that could reduce the rights of people who are legally seeking asylum.

At a round table with Trump broadcast in February, one Border Patrol official described a case he said led to eight indictments in South Carolina, including of a Guatemalan woman who said she had “recycled” children 13 times for payments of $1,500 a child. The U.S. attorney’s office in South Carolina told the AP this week that case was sealed and declined to comment on it.

Meanwhile, immigrant advocates say the Border Patrol regularly cites fraud when it separates a child from an adult relative who isn’t a parent, even if the relative is the child’s effective guardian.