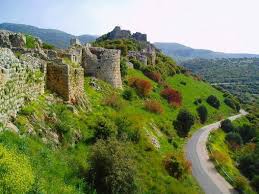 President Trump continues to make good on his campaign promises. Yesterday he formally signed a proclamation recognizing Israel’s sovereignty over the Golan Heights, reversing more than a half-century of U.S. policy in the Middle East.

In Biblical times, the Golan Heights was referred to as “Bashan;” the word “Golan” apparently derives from the biblical city of “Golan in Bashan,” (Deuteronomy 4:43, Joshua 21:27). The area was assigned to the tribe of Manasseh (Joshua 13:29-31).

From the western Golan, it is only about 60 miles – without major terrain obstacles – to Haifa and Acre, and Israel’s industrial heartland.  The Golan – rising from 400 to 1700 feet in the western section bordering on pre-1967 Israel – overlooks the Huleh Valley, Israel’s richest agricultural area. In the hands of a friendly neighbor, the escarpment has little military importance.  If controlled by a hostile country, the Golan has the potential to become a strategic nightmare for Israel.

From 1948-67, when Syria controlled the Golan Heights, it used the area as a military stronghold from which its troops randomly sniped at Israeli civilians in the Huleh Valley below, forcing children living on kibbutzim to sleep in bomb shelters. In addition, many roads in northern Israel could be crossed only after probing by mine-detection vehicles. In late 1966, a youth was blown to pieces by a mine while playing football near the Lebanon border. In some cases, attacks were carried out by Yasir Arafat’s Fatah, which Syria allowed to operate from its territory.

The U.S. is the first country to recognize Israel’s sovereignty over the Golan, which the rest of the international community regards as Israeli-occupied.  President Trump’s proclamation was witnessed by Israeli Prime Minister Benjamin Netanyahu on Monday,

Syria’s state news agency says thousands of Syrians have gathered in the streets of different cities to protest President Trump’s formal recognition of Israel’s sovereignty over the occupied Golan Heights with protestors carrying Syrian and Palestinian flags and banners reading “Golan is Syrian.”