Trump’s Tweet Claims Voter Fraud in California: Is He Correct? 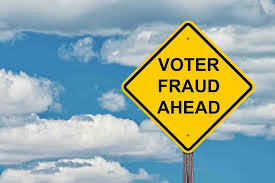 President Donald Trump re-tweeted troubling statistics today about the voter fraud in California and, predictably, the left is calling him a liar.

But the truth is on his side.

In January, California and Los Angeles County agreed to purge as many as 1.5 million inactive voter registrations across the state as part of a court settlement finalized with Judicial Watch, a political watchdog.

Judicial Watch sued the county and state voter-registration agencies, arguing that the California government was not complying with a federal law requiring the removal of inactive registrations that remain after two general elections, or two to four years.

Inactive voter registrations, for the most part, occur when voters move to another country or state or pass away but remain on the rolls. The lawsuit alleged that Los Angeles County, with its more than 10 million residents, has more voter registrations than it has citizens old enough to register with a registration rate of 112 percent of its adult citizen population.

The entire state of California had a registration rate of 101 percent of age-eligible citizens.

These ineligible voters continue to receive mail-in ballots which can easily be used to cast illegal votes by family, friends, neighbors, etc.

This is why Trump tweeted that it’s no wonder California is a “blue state.”

Judicial Watch said the California settlement would “clean up election rolls in Los Angeles County and California—and set a nationwide precedent to ensure that states take reasonable steps to ensure that dead and other ineligible voters are removed from the rolls.”

Secretary of State Alex Padilla tried to assure California voters that it would not lead to “unnecessary removal of active and eligible voters.”

“Safeguards remain in place to ensure voter-list maintenance procedures are followed before canceling any voter registration records,” Padilla said in a statement.

California Department of Motor Vehicle’s new process of automatically registering people to vote when they get a drivers license, which began in late April of last year, was credited with boosting voter registration and turnout to historic highs.

That so-called motor-voter law also raised still-unanswered questions about the number of illegal immigrants and other non-citizens who may be voting.  California officials still cannot say whether non-citizens voted in the last election, the Sacramento Bee reported .

In January, Padilla confirmed for the first time that his office is actively investigating whether illegal immigrants and other non-citizens voted last year because the DMV erroneously registered them to vote.

Bloated and inaccurate voter registration rolls make it more difficult for the democratic process to work—hampering political groups in their efforts to send targeted mailings and pursue get-out-the-vote efforts.