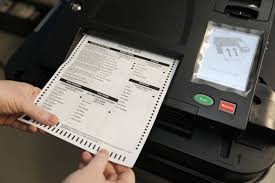 Amazing, but not really.

Voting machine issues have been noted in several states, including Arizona, where Republicans Keri Lake (Governor) and Blake Masters (Senate) are behind in the count. Donald Trump has even weighed in on the FACT that in Maricopa County (Phoenix) alone some 20 percent of the voting machines had to be shut down with technicians brought in to see what happened.

Nonetheless, despite verified problems in Arizona the leftist media have decided any talk of voting irregularities is unjustified. After all, they are the keepers of truth (note my obvious sarcasm). They conduct no investigations of their own and instead write clever headlines besmirching all those who question the integrity of the vote.

The headlines are the news.  And the cheat goes on.