Was Soccer Star Kept Off World Cup Team Because of Her Christian Faith? 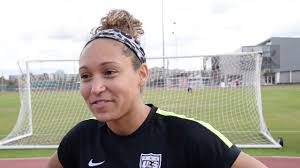 She considered by many to be one of the top women soccer players in the United States, but she was not a part of the U.S. World Cup team.

Some think it has to do with her outspoken Christian faith.

Jaelene Hinkle, who plays for North Carolina Courage, has been described as “the finest left-back in the NWSL,” but was not selected for the World Cup squad.

“Many have wondered if the snub had anything to do with the player’s refusal to promote the LGBT lifestyle, reportedly on Christian moral grounds,” reports Sputnik.

Coach Jill Ellis claimed that the decision to leave out Hinkle was ‘solely based on soccer’, but this explanation was met with “widespread scepticism,” according to the Washington Times.

Many believe Hinkle was left off the roster because she spoke out against the U.S. Supreme Court’s ruling that legalized same-sex marriage, and in 2017 refused to play in a match where the US team wore special rainbow-themed team jerseys to celebrate Gay Pride Month.

“I’m essentially giving up the one dream little girls dream about their entire life.  It was very disappointing. If I never get another national team call-up again then that’s just a part of [God’s] plan, and that’s OK,” said Hinkle.

Following the team’s World Cup win, attention has centered around purple haired captain Megan Rapinoe, who is a lesbian, has made a series of anti-Trump statements, refused to sign the national anthem, and refused to visit the White House.