Young Church Dropouts: Wut Up and What to do? 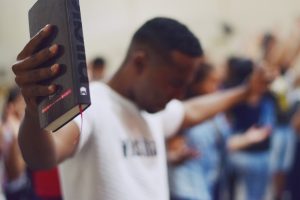 Social justice, humanism, liberal-thinking, and all of the other crap (there’s really no better way to describe it) that has been steeped upon the youth of America is slowly but surely taking its toll.

In a  LifeWay Research survey released this week, 66 percent of Americans between 23 and 30 years old said they stopped attending church on a regular basis for at least a year after turning 18, compared to 70 percent in 2007.

Okay, so not a significant decrease and, one could argue, it’s to be expected.  Most young churchgoers skip out on Sundays at some point amid their transition to going to college, moving away from home, or starting their first jobs.  LifeWay says that historically about two-thirds of dropouts return to services once they get older.

However, reading the study closely one discovers young people are more likely to cite  political and spiritual concerns (I read that as being social justice and humanism) as pushing them away from the church, with 70 percent listing such beliefs as a reason for their departure in 2017 compared to about half (52 percent) 10 years ago.

Other popular reasons to not attend include: a perception that church members were hypocritical (32 percent), and political/social justice disagreements with church leadership (25 percent–compared to 15 percent in 2007).  In other words, the aggressive indoctrination of ungodly, hyper-liberal, humanist secularism that these young people have been bathed in is catching up.

It’s actually amazing the drop numbers are not significantly higher.

The worst thing that the church can do in response to these statistics?  Attempt to  accommodate the persuasions of the younger generation.

The best thing the church can do?  Live soundly, lovingly, and uncompromisingly for Messiah Jesus.