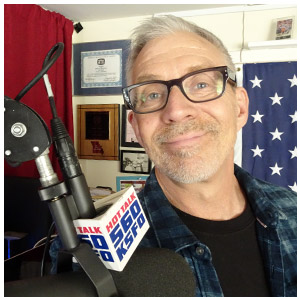 Brian Sussman is the former host of the Morning Show on KSFO in San Francisco.

According to Brian, "The program was incredibly successful because we combined politics with lifestyle news and oddball trending stories, and then top it all off with flat-out hilarity from my co-host, Katie Green. Plus, we also have the best producer in radio--Sheri Yee."

Brian Sussman Exits KSFO, San Francisco. Eighteen-year KSFO, San Francisco talk show host Brian Sussman announces he’s leaving the Cumulus Media station where he’s been hosting the morning drive show.  Sussman says that in April of 2019 he resigned due to an impasse in contract negotiations, but soon thereafter reached a temporary agreement to host the show four days per week through December (his brother, Brad Sussman, hosted the fifth day).  But in October, Sussman was required to go on medical leave through the remainder of the year.  That affected his plans for continuing into 2020.

Podcasts are also available below.