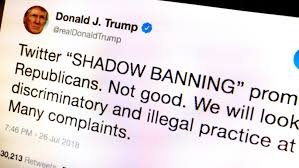 One of the many ways to pacify social media users deemed problematic by platforms like Facebook and Twitter is to employ a tool called a “shadow ban.” The term originates from a time where internet communities primarily existed in individual, isolated web forums.  Rather than outright ban a user, a forum moderator would “shadow ban” them.  Those banned would never know it.  They could read the posts of others, and even create their own posts as usual.  However, nobody else in their community could see their posts, or even know that they tried to say something.

This garbage is going on today, primarily aimed at conservatives on major outlets like Facebook and Twitter.  This practice is dangerously un-American.  Yet tragically, an entire generation has been raised to believe such banning is appropriate.

Indeed, as I illustrate in this podcast, I have been a target. In fact, I’m so sick of these leftist corporate policies that I recent posted my last Tweets.

This is another podcast loaded with FACTS.

Please share this with episode with others: listen here (or wherever you love to listen to podcasts).