Nancy Pelosi, Her Nephew Gavin Newsom, and the Presidential Sweepstakes – The Podcast 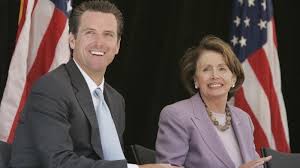 I’ve been working in the news media biz in San Francisco consistently since 1989. It’s one of the most corrupt cities in the United States, but it’s corruption is deceptively concealed by a tolerant, interracial, multigender, smiley face.

The City, as it’s known by locals, is the headquarters of Nancy Pelosi, in my mind the most powerful woman in America. Her nephew is the former Mayor of San Francisco and the current governor of the state of California—Gavin Newsom. His rise in California politics is typical of the democrat party—it’s been more of a coronation than a nomination.

Gavin Newsom is the man I believe will succeed Donald Trump as POTUS.

In this coming election you ask?

I’ll answer that question in the current Hidden Headlines Podcast (Episode 60), and I’ll also describe for you in detail about how cunning, ruthless, and crooked are those who have enabled Mr. Newsome to become such a powerful political player.

It’s all in this edition of Hidden Headlines!