I love it when the media’s talking heads on the left start believing their own fake news.

Despite the obviously empty rows at the 19,000 seat venue in Tulsa, Oklahoma for Donald Trump’s Saturday night campaign rally, the event was actually sold out 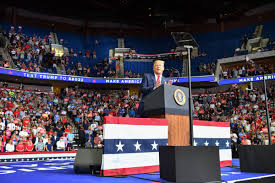 This morning the San Francisco Chronicle’s website is proclaiming: “What empty seats in Tulsa tell us about Trump 2020.” The idiotic piece is trying to make readers think Trump’s following is diminishing.  Boy, will these buffoons be reeling in a putrid soup false hope come the morning after the election in November.

On the platforms, liberals had been reserving tickets for the rally – with no plans of actually showing up.  The Trump campaign had called for supporters to sign up for a free ticket to the rally using their mobile phone in a June 11 tweet and the left urged people to do so as well to prank the campaign.  This was  confirmed a couple weeks ago when Mary Jo Laupp, a 51-year-old grandmother, living in Fort Dodge, Iowa, went viral In a TikTok video wherein she urged people to take part in the scheme, racking up hundreds of thousands of likes in the process.