The Foolishness and Danger of Rewriting History 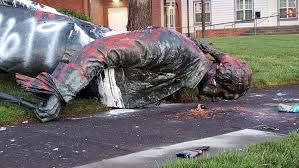 To the people who have torn down George Washington statues: it’s dangerous to view history through a present lens.

History is filled with pages of imperfect people who were used by the Creator to fulfill a critical role in world history. Indeed, such was the case with George Washington. Sans his leadership, and the protection from harm that God provided for him, there would have been no United States of America. And without the USA? Well, that will be the subject of my next Hidden Headlines Podcast (Episode 64).

That stated, George Washington wrote his will several months before his death in December 1799. In the document, Washington left directions for the eventual emancipation of his slaves after the passing of Martha Washington. Of the 317 enslaved people at Mount Vernon in 1799, 123 of the individuals were owned by George Washington and were eligible to be freed as per the terms of the will.

By law, neither George nor Martha Washington could free the Custis dower slaves. Upon Martha Washington’s death in 1802, these individuals were divided among the Custis grandchildren. By 1799, 153 of the people enslaved at Mount Vernon were part of this dower property.

In accordance with state law, George Washington stipulated in his will that elderly enslaved people or those who were too sick to work were to be supported by his estate in perpetuity. The remaining non-dower enslaved at Mount Vernon did not have to wait for Martha Washington’s death to receive their freedom. Writing on the subject to her sister, Abigail Adams explained that Martha Washington’s motives were largely driven by self-interest. “In the state in which they were left by the General, to be free at her death,” Adams explained, “she did not feel as tho her Life was safe in their Hands, many of whom would be told that it was [in] their interest to get rid of her–She therefore was advised to set them all free at the close of the year.”

In December 1800, Martha Washington signed a deed of manumission for her deceased husband’s slaves, a transaction that is recorded in the Fairfax County, Virginia, Court Records. They would finally be emancipated on January 1, 1801.

Without the United States of America, the world would be one likened to that of a prison planet.