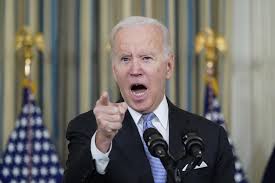 CNN is calling it, “The Midterm Message.”

Yesterday Joe Biden gave the most intrinsically vicious speech I have ever heard from a president (outside of a dictator in a socialist, fascist, or communist regime). I wish democrats would pull back for a moment and really listen to what this crash test dummy of a man is saying. Oh wait. They do listen. In fact they know “the code.”

Most know these code words and slogans because they get their news from CNN, or social media. Most of these people are simple voters, but others are in the trenches and willing to fight.

That said, once again, Joe is using his pulpit as a dog siren to really agitate the latter, who are void of a moral compass and are willing to lie, cheat, and destroy to move toward eliminating the chance of a Trump win in 2024 and move America toward democratic socialism (which generally leads to totalitarian communism) and The Great Global Reset.

Here’s a portion of what Joe said, with my translation of his devilish rhetorical code words in brackets:

“Donald Trump and the MAGA Republicans [people who take literally the Articles of Confederation, Declaration of Independence, Bill of Rights, and the Constitution]  represent an extremism [January 6th] that threatens the very foundations of our republic.

“I know because I’ve been able to work with these mainstream Republicans [back when I was a Senator and liked to cut crooked deals with other unscrupulous members on both sides of the senatorial aisle].

“But there is no question that the Republican Party today is dominated, driven, and intimidated by Donald Trump and the MAGA Republicans [he is a dictator], and that is a threat to this country.

“These are hard things [and we must be ready to utilize the IRS, the DOJ, and street fighters to go to battle].

“But I’m an American President — not the President of red America or blue America, but of all America [conservatives must submit].

“And I believe it is my duty — my duty to level with you, to tell the truth no matter how difficult, no matter how painful [members of the leftist media, get ready to quote me on this].

“And here, in my view, is what is true: MAGA Republicans do not respect the Constitution [they take it literally, not as the living/breathing document that we must change].  They do not believe in the rule of law [damn, we  fooled them with January 6th, didn’t we?]  They do not recognize the will of the people.

“They refuse to accept the results of a free election [they want to run Trump for president again!].  And they’re working right now, as I speak, in state after state to give power to decide elections in America to partisans and cronies, empowering election deniers to undermine democracy itself [our ways to cheat are being severely restricted].

“MAGA forces are determined to take this country backwards, backwards to an America where there is no right to choose, no right to privacy, no right to contraception, no right to marry who you love [the problem are those archaic born-again Christians].

“They promote authoritarian leaders [Trump], and they fan the flames of political violence [January 6th] that are a threat to our personal rights [abortion and LGBTQ+ agenda], to the pursuit of justice [equity], to the rule of law [our version, not theirs], to the very soul of this country [as envisioned by us].

“They look at the mob that stormed the United States Capitol on January 6th — brutally attacking law enforcement — not as insurrectionists who placed a dagger to the throat of our democracy, but they look at them as patriots [and we need to scare the hell out of all of those who consider themselves patriots].

“And they see their MAGA failure to stop a peaceful transfer of power after the 2020 election as preparation for the 2022 and 2024 elections [we must win the midterms and keep the White House in 2024 to further our agenda!].

“They tried everything last time to nullify the votes of 81 million people [thank God the networks all rallied on election night–right?].  This time, they’re determined to succeed in thwarting the will of the people [because they have changed the voting laws in 18 states and are considered changing them in 39 states this year alone!].

“That’s why respected conservatives, like Federal Circuit Court Judge Michael Luttig, has called Trump and the extreme MAGA Republicans, quote, a “clear and present danger” to our democracy [don’t associated with them, cancel them whenever possible, and do all you can to silence them at the polls].”