Limbaugh: the man who launched a movement 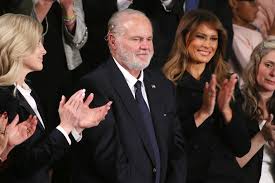 Rush Limbaugh has lost his battle with cancer.

The first time I heard Rush was on KGO in San Francisco. It was 1988. If I remember correctly Rush’s new syndicated show was broadcast out of Sacramento five days a week. KGO was running a replay of one of his shows on either Saturday or Sunday.

I was working in television in San Francisco (KPIX) and part-time for CBS in New York. I was stunned as I listened to the radio. It was as if Rush was saying what I had always been thinking!

Actually, given the year, I couldn’t believe someone could get away with the truth that this guy was throwing out. It was sooo politically incorrect.

Eventually, like probably hundreds of other wannabe local radio talk show hosts, his presence on the radio made me want to try my hand at this new type of show.  For me, that wouldn’t occur for another 13-years.

Michael Savage hit the local San Francisco airwaves with his brand of conservative radio in about 1994, also on KGO (by this time Rush had moved to KNBR in San Francisco and later to the station I eventually worked for, KSFO, in about 1998).

Between Rush and Savage my conservative opinions and thoughts about how to do talk radio were fashioned.

Rush was a mighty force in American conservatism, in fact the mightiest. He brought to the public sphere commentary and information that our representatives in elected office were incapable to putting forth. Rush spawned the proliferation of thousands of conservative radio shows, both on broadcast radio and Internet. For crying out loud, without Rush, Fox News wouldn’t even be a glint in the eye of Rupert Murdoch.

I heard that in recent years Rush repented of his sins (whatever those may have entailed) and turned his life over to the Lord and Messiah Jesus.

Looking forward to talking with him in Eternity.