My Eyewitness Take: Trump and Pelosi at the National Prayer Breakfast 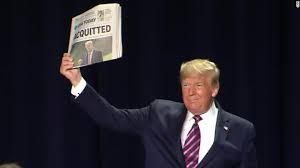 I was there to see the contention between the President and the Speaker–and there was contention.

The last time I witnessed a National Presidential Prayer Breakfast in Washington DC was in the mid-Eighties. Ronald Reagan was President and Billy Graham was the keynote (more on that in a moment).

This time around the keynote was a guy who I didn’t know (and interestingly, I don’t recall his name). However, he gave a compelling talk about loving your enemy. I must say, his speech hit me between the eyes. The day before I visited the Holocaust Museum (I’m a Jew who believes Jesus is Messiah).  I have to say, the museum’s opening feature literally left me gasping for breath. By the end of my three hours I was an emotional wreck.  Anyway, the thought of loving (and more importantly forgiving) the Nazi’s who slaughtered portions of my family is daunting.

Anyway, before the guy spoke all the people on the stage had a word or a prayer to share, including my congressional representative, Speaker Nancy Pelosi.  Keep in mind, Pelosi is a Catholic. She shared (in my opinion) a non-inspiring prayer about the poor.

Shortly thereafter, an unseen announcer came over the public address system and said, “Ladies and Gentlemen, the President of the United States, Donald J. Trump!” which was followed immediately by Hail to the Chief.

All 4,000 people assembled in the Hilton Hotel ballroom stood to their feet looking straight ahead at both the stage and the two giant video screens to each side simulcasting the scene before us.

In walks the President. He was all smiles as he graciously waved to the adoring crowd. All stood, including Pelosi. Then, with a smirk, he reveals the front page of USA Today which in extra large bold type proclaimed, ACQUITTED.

In that moment Pelosi looked like she aged a decade.

Yes, given the setting, one could make the argument it was a bit juvenile of Trump to his the stage with the paper in hand, but I have to tell you I haven’t laughed that hard in years. Especially as I witnessed the scowl that instantly formed on Pelosi’s face.

The President took his seat and the keynote did his thing.  When he was done Trump took to the podium,  looked at the guy and said, “That was a good speech, but I’m not so sure if can do it.”

I appreciated Mr. Trump’s honesty regarding forgiving your enemies, especially given the crap he’s been rolled thought over the past couple of years. Forgiveness is not easy, even when aided by faith in God.

But here’s the Hidden Headline.  In his speech, the President talked about the recent Executive Order he signed allowing prayer in the public schools.  Everyone in the room rose to their feet in applause–except Nancy Pelosi.

Then Trump spoke of his commitment to the sanctity of life (ie, his stand against abortion). Once again Nancy–the catholic–sat on her rear end refusing to clap.

By the way, did you hear about this on a single news outlet (including Fox)?

I’m not sure exactly where Donald Trump is regarding his faith in Jesus as Lord, but I can tell you God is pleased with a President who has placed his support in the column of both prayer and LIFE.

As for my first Presidential Prayer Breakfast, in the middle of the festivities the coffee I consumed kicked-in and I had to visit the restroom.  As I walked out of the restroom and into the totally empty hallway to get back into the auditorium there was Billy Graham.  Four years earlier (read this) I had interviewed Graham for the TV station I was working for in Reno. I walked up to him and introduced myself and without missing a beat he remember me.