Russia’s Next Target? “Alaska is Ours!” 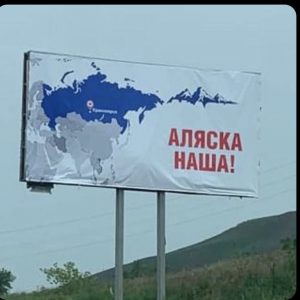 This billboard was spotted in Krasnoyarsk, Russia. The captions declares, “Alaska is Ours!”

The photo was sent to me by a pastor friend  in Bulgaria, who lived under Russian communism for the first twenty-some-odd years of his life. Krasnoyarsk in the third largest city in Siberia. The billboard is not a joke; loyalists to Mother Russia believe that Alaska, like Ukraine, is theirs.

What we have in America is a lack of authentic command in the White House.  Crazy leaders like Russia’s Putin, North Korea’s Kim Jong Il, China’s Xi, Iran’s Mullah, all sense weakness in that of President Joe Biden. As such, they perceive an opportunity, and opportunity to extend their sphere of global influence and dominance.

In the case of Russia, it’s creating a new empire that could well include Alaska with its bountiful natural resources including oil and gold.

Thanks to the Biden administration, what we really have is the making of a World War.

You see, as my friend who sent me the photo said, “When Donald Trump was president, despite his rough edges the bad guys all feared him. With Biden in office they all sense this is their lucky day.”

Indeed, Trump truly believes in the slogan, Make America Great Again. He conducted his international affairs as if the United States was the most powerful nation in the world and was not to be messed with. This is why the left now incessantly tries to make fun of “MAGA.”

Unlike President George W. Bush, you did not see Trump walk hand-in-hand with the Saudi King (a common gesture of friendship in the Middle East, which to the Western eye looks plain stupid).

When Trump met Kim Jong Il he actually had the nerve to walk twenty steps into North Korea before the two shook hands.

When Trump met Putin for the first time it was obvious by the body language who was the dominate figure.

When Trump met China’s dictator they did so at Trump’s personal, massive, estate–not the White House; it was the total show of superior influence.

When Trump met the Mullah they–oh, wait, the Supreme Leader of Iran sheepishly bailed out of the meeting at the last minute.

Even when Trump met with Queen Elizabeth he ignored protocol and dared walk in front of her. Nonetheless, Newsweek actually reported that the Queen claimed Donald Trump was her favorite American President.

Friends, we are potentially in BIG trouble. The Biden White House is either a hot mess, or this is a purposeful, coordinated effort to create calamity and bring the world one giant step closer to the Great Reset that the elites pine for.

This is why they loathe (and are afraid of) Donald Trump and another term for him as President.

This is why they are haunted by MAGA.

Pray to the God and Savior, who by the way will someday return as our Eternal King and issue justice upon the nations.

Meantime, these are telling times.