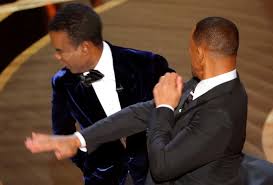 Ukraine, runaway inflation and Biden’s bungles have all taken a backseat to “that moment” during the Oscars broadcast Sunday night.

It’s still all the talk.

If you just dropped in from Mars, “that moment” was one which will live in Hollywood history forever.  Comedian Chris Rock was onstage to present the Oscar for Best Documentary Feature and ad-libbed a line about actor Will Smith’s wife, actress Jada Pinkett Smith, who has been dealing with the skin disorder alopecia since 2018. Jada proudly rocks her head bald as a result.

Christ Rock quickly picked her out of the crowd and said, “Jada, I love you. GI Jane 2, can’t wait to see you,” he quipped, appearing to refer to Pinkett Smith’s shaved head.

GI Jane was a 1997 American drama film starring Demi Moore in a fictional story about the first woman to undergo special operations training, similar to the US Navy Seals. Moore had a shaved head for the movie.

In the immediate camera cutaway to the audience of stars, Will Smith is seen laughing at the joke, but Jada is clearly not. The next thing you know, Smith is seen on stage, walking briskly toward Rock. At first viewers might have thought this was all a planned bit.

Smith then struck Rock across the face with very hard, and loud, open handed slap.

Rock reeled and, very professionally, attempted to compose himself as a furious Smith barged off.

“Wow! Wow. Will Smith just smacked the shit out of me,” said Rock, looking visibly shaken.

Smith was quickly back in his front row seat yelling: “Keep my wife’s name out your f***ing mouth,” to which Rock replied: “Wow, dude. It was a GI Jane joke.”

“I’m going to, OK?” Rock politely said, before looking back at the camera.  After a pause, Rock continued, “That was the greatest night in the history of television.”

Very professionally he somehow immediately went on to present the award for Best Documentary to Questlove for Summer of Soul.

Meantime, video posted on social media shows Jada smiling, and Will crossing his legs and nodding his head like nothing serious just happened. After the show he was seen dancing at the Vanity Fair after-party.

Ask 100 people about what happened you’re bound to get 100 different opinions. But it’s safe to say that all 100 would agree that what happened at the Oscars with Will and Chris was not the way to go.  Smith’s temper was totally out of control. Others would argue Rock’s joke was out of line.

My take is, anyone attending the Oscars is fair game for a comic like Chris Rock. Selecting him as a active participant on stage places all at risk in the front rows given his brand of comedy. Everyone should know this. Was his joke unnecessary? Sure. But much of his stuff is routinely off color and risqué.

But, was his comeback after the hit one of uncommon composure?  Yes. My guess is over his decades of comedy, Rock has been ferociously heckled and this attack was rebuffed thanks to all of that experience. In fact, he was incredibly gracious in his attempt at making peace.

Did Will Smith overreact? Absolutely. Chris Rock could have filed an assault charge or filed a lawsuit. However, the fact that Smith charged the stage and hit Rock tells us two things. One, Smith illustrated uncontrolled rage. Two, he showed us that as a superstar who makes a living performing before millions on camera, there’s a line in his life that has been blurred. He makes his money on camera. The paparazzi follows him at all times with cameras. He settled a beef with Rock on a stage witnessed by millions, on camera. He could have demanded a private meeting with Rock right after the show to get an apology, but instead he wildly took his anger to stage and carried out his physical wrath live for the world to see, on camera.

During the commercial break following the incident, fellow actor Denzel Washington spoke with Smith, who wiped tears from his eyes, illustrating remorse over what had just occurred.  In due time, Smith was awarded “Best Actor” for his role in King Richard. In his acceptance speech he apologized to the academy and the other nominees. He also shared that Washington told him, “At your highest moment, be careful, that’s when the devil comes for you.”

He then received a standing ovation from the audience.

What? A standing ovation? Honestly, I agree with actor/comedian Jim Carrey who says Smith should have been escorted out of the building after the hit. Apparently he was asked to leave but refused. Shame on the Academy for not removing him. Carrey also says Rock should sue for $200 million. “That video is going to be there forever,” said Carrey.

Clearly, Smith has an anger issue that was unleashed for all to behold.  The Bible, especially the Book of Proverbs, has much to say about anger. Here are a couple choice examples. Proverbs 15 tells us:
A gentle answer turns away wrath,
But a harsh word stirs up anger.
The tongue of the wise makes knowledge pleasant,
But the mouth of fools spouts foolishness….
A hot-tempered person stirs up strife,
But the slow to anger calms a dispute.
These words are as true as water is wet. Another scripture, this one from Jesus in Luke 6:45 says,
A good man brings good things out of the good stored up in his heart,
and an evil man brings evil things out of the evil stored up in his heart. For the mouth speaks what the heart is full of.
Will Smith needs God. So does his wife, Jada. Their marriage is a public mess.
Will needs a heart transformation which will lead to a mouth reformation. I wouldn’t be surprised if his career tanks after this outburst.

More on all of this in on Brian Sussman Show, Episode 131.