Raid on Mar-a-Lago: straight from the Tyranny Playbook 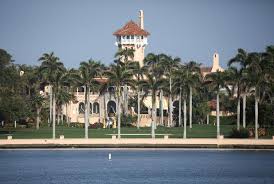 No one is saying what the FBI was looking for when it executed a search warrant at Trump’s Mar-a-Lago mansion on Monday.

Press reports say the search was conducted for the benefit of the National Archives, which previously retrieved 15 boxes of White House records, some of them apparently classified, that should not have been moved to Mar-a-Lago.

It wouldn’t surprise me if the argument will be,  “We were here looking for specific documents, we didn’t find them,  but look what we did find.”  Who knows what they may have perhaps even planted?  Nobody know what happened when the FBI was in Mar-a-lago because the lawyers weren’t allowed to observe.

The left will stop at nothing.

This is a page from the tyrannical playbook used throughout history–all over the world.

Donald Trump has responded by saying in  Truth Social post:

“These are dark times for our Nation, as my beautiful home, Mar-a-Lago in Palm Beach, Florida, is currently under siege, raided, and occupied by a large group of FBI agents,” Trump said in a post on Truth Social.

“After working and cooperating with the relevant Government agencies, this unannounced raid on my home was not necessary or appropriate.”

Is it a coincidence that this raid by the FBI came two days after Trump’s latest hint at a 2024 run?

“It’s coming,” Trump said when responding to questions from the press before he took the stage at the Conservative Political Action Conference (CPAC) in Dallas, Texas, on Saturday, “and I think people are going to be very happy,”

On the post, Trump called the raid “prosecutorial misconduct, the weaponization of the Justice System, and an attack by Radical Left Democrats who desperately don’t want [him] to run for President in 2024, especially based on recent polls,” adding that Democrats “will likewise do anything to stop Republicans and Conservatives in the upcoming Midterm Elections.”

Nothing like this has ever happened to a President of the United States before.

As for the raid on Mar A Lago, what do you think the democrats  might plan with those 87,000 new IRS agents and raids on Mr. and Mrs. America???