We’ve Lost Our Supreme Court. Where is the Outcry? 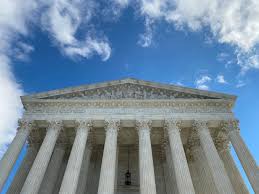 EQUAL JUSTICE UNDER LAW — These are the words written above the main entrance to the Supreme Court Building in Washington D.C.  They express the ultimate responsibility of the Supreme Court of the United States.

The Court is the highest tribunal in the Nation for all cases and controversies arising under the Constitution or the laws of the United States.  As the final arbiter of the law, the Court is charged with ensuring the American people the promise of equal justice under law and the final guardian and interpreter of the Constitution.

We The People of the United States of America have lost our Supreme Court.

Where is the outcry?

The most important function of our Representative Democracy are free and fair elections.  In our last  national election, for President  of this nation, over 75 million  citizens voted for Republican Donald J. Trump to have a second term.  In addition, Republicans Won all of their elections involving the U.S. House of Representative seats, and added three State legislatures to their already dominant position.

And yet Donald Trump lost to Joe Biden.

There were countless allegations of voter fraud, including:

– Antrim County, Michigan: 6,000 votes were “erased” for Trump and went to Biden.

– Minnesota had 89% voter turnout, Michigan had 90% (unheard of in American history).

Where is the outcry?

Concerns regarding voting integrity were so serious that over 20 states filed a suit with the Supreme Court with hopes the Court would hear their concerns and rule accordingly.

Without explanation, the Supreme Court refused to hear those concerns. In other words, the Court totally dismissed the case without hearing a word about what was to be presented.

And the Big Media has been totally silent in a full report on this story.

Talk about a thumb in the eye of over 75 million Americans!

WHERE IS THE OUTCRY?

Also without explanation by Big Media: trying to do a search to find the original allegations of fraud is very difficult.

Without a fair and just Supreme Court, We The People are in dire straits.

Maybe God is allowing all of this so We His People rely on the power of prayer?