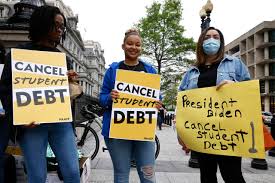 Americans are poised to foot a nearly $300 billion deal with Biden’s announcement Wednesday to cancel $10,000 for each student loan borrower, $20,000 for borrowers who received Pell Grants, and extend a repayment pause through Dec. 31, 2022.

The handout only applies to borrowers earning less than $125,000 a year, and undergraduate loan borrowers can cap repayment at 5% of their monthly income.

This also means that, “Students will likely feel liberated to borrow more money on the assumption of future loan forgiveness, and universities will take advantage of the additional borrowing by raising tuition,” said Brian Riedl, a senior fellow in budget, tax and economic policy at the Manhattan Institute.

Additionally, this huge holiday for student debt will increase future tuition costs.  “Even after spending over $300 billion and worsening inflation, canceling student loan debt will raise tuition prices for future generations,” said Isabelle Morales, a policy communications specialist at Americans for Tax Reform. “The primary driver of tuition costs has been the federal government’s subsidization of college. If colleges and universities expect the government to forgive large chunks of the cost of their education, they’ll be motivated to raise costs on students.”

As for the responsible people who have paid off their college debt, White House Spokesperson Susan Rice stuttered yesterday: “Yes, those who have paid their loans back deserve to be credited.  That’s fantastic.  That’s to their — to their credit.”

Biden’s student loan socialism is a slap in the face to every family who sacrificed to save for college, every graduate who paid their debt, and every American who chose a career path in our Armed Forces in order to avoid taking on debt. This policy is astonishingly unfair.