November 8, 2019 / Brian Sussman / 8 Comments
After being temporarily banned by Facebook for outing the name and image of this traitor (like it’s not found elsewhere on the Internet) I have updated my 30-minute podcast describing this coup attempt by the Democrats to take out Donal Trump  that you can listen to by clicking here, but there are the significant bullet points: 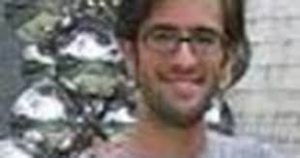 – The Whistleblower is Eric Ciaramella, 33, Yale Grad, registered Democrat.
– Worked as a CIA analyst (fluent in Russian and Ukraine) and during the Obama regime.
– In 2015 he was transferred by John Brannan (CIA Director, who began the Russian collusion narrative when Trump was elected) to work for Susan Rice, Obama’s National Security Advisor.
– Ciaramella’s new job included working as Joe Biden’s point man on Ukraine issues (Biden’s son was on board of Ukraine energy corporation).
– in 2016, before the election, Ciaramella invited Democratic National Committee operative Alexandra Chalupa (a Ukrainian) who was trying to to dig up dirt on the Trump campaign during the 2016 election, to the White House.
– After the election, Ciaramella continues in the Trump White House, but is booted in May of 2017 for suspected leaking to the press. He returns to the CIA.
– Ciaramella’s attorney is Mark Zaid.
– In a mysterious July 2017 tweet (replying to a Trump comment) Zaid said, “It’s very scary. We will get rid of him, and this country is strong enough to survive even him and his supporters. We have to.”

– More bizarre is a post just 10-days after Trump is inaugurated, in response to Trump’s appointment of Dana Boente as Acting Attorney General (who recommended Jeff Sessions recuse himself from the collusion investigation), Ziad tweeted this: “#coup has started. As one falls, two more will take their place. #rebellion #impeachment” 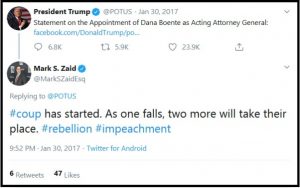