Hidden Headlines #66 unpacks how liberalism teaches its subjects, “what to think,” not “how to think.” 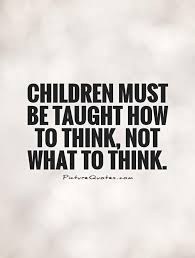 Things are screwed up. But should we be surprised?

The education system in the USA is doing more to indoctrinate our children than to educate them. This has been in the works for decades.  It’s a system that rewards students for regurgitating what they are supposed to have learned, especially in subjects like social studies, history, civics and government, and even in science—global warming and climate change immediately come to mind there. It’s shaping these young minds to think in a certain way, whereby they’re being taught to accept authority as truth, instead of truth being the authority.

As such, teachers have become repeaters of carefully selected information. Are the teachers to blame? That’s certainly debatable, in many or perhaps most cases our public school teachers don’t have a lot of flexibility with the subject matter in that they are employees—cogs in the wheel—that must teach for the tests. They’re simply recycling information; information that has managed to evade the scrutiny of most parents for a long time.  Thus, children are no longer the masters of their own learning, and instead, their minds are being treated as storage containers for liberal, progressive, and tyrannical ideas, philosophies and ideologies.

In this edition of Hidden Headlines I’ll ties all of this into MAGA– Make America Great Again. It’s the slogan that Donald Trump repeated over and over during his first presidential campaign. Had he lost, that slogan would have been thrown into the ash heap of a myriad of other failed political slogans. But he won. And now, those four words, when repeated together, cause the skin to crawl for those on the left side of the political aisle. In fact, to counter MAGA, there’s a new slogan that has recently been picked up by the left: MATA. On the surface, it’s a mantra that seems to make sense—of course we want our citizens to think for themselves. However, in this edition of HH you’ll discover how that phrase, MATA, is actually part of a scheme that has completely over taken broad swaths of our society—like our public school system–in fact, it’s a key part of a brainwashing tactic that’s been utilized by socialists, communists, and other totalitarian regimes for a long time.

Here’s a direct link to the podcast on my website, but it’s available wherever you listen to your favorite podcasts.