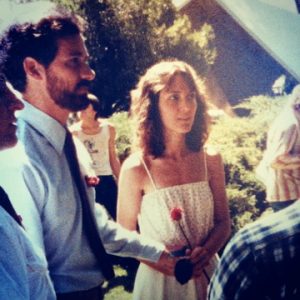 In the latest episode of Another Chance you will meet John and Ursula Frattarola.  John and I worked together in TV in Reno.  When he and Ursula left for a career in Hollywood, I told John, “I’m praying that you’ll become miserable.”  In time, it happened.  And just as I prayed,  thanks to the graciousness of God, John’s misery turned to joy–and for Ursula too!  Prepare to be inspired.

By the way, the cover photo for this episode was taken at John and Ursula’s wedding, at which I was honored to have been asked to share a message faith.

John’s congregation is located in Martinsburg, West Virginia.  You can learn more about it here… 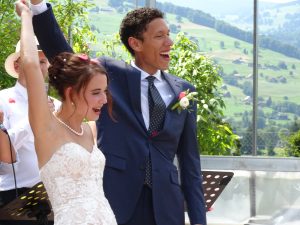 It was the year 2000 and I had been the TV weatherman on Channel 5 since 1989, and as you will learn in the podcast, had to make a decision to stay on TV, or find another job should we decide to adopt Josh.  Some have asked why I didn’t just take a different job shift at the TV station, like do the weather on the morning news instead of evenings and late night.  The problem was such a move would have caused the station to fire the morning weather person (who was under a contract, like I was), and then hire a new evening person who would have to perform under the cloud of my popularity.  Instead my boss (a super good guy, by the way) was willing to let me out of my contract two years early, and allow me to depart under an agreement that I would not work for another station for the next two years.  After a year they did call me to see if I wanted my old job back, complete with my former salary.  For a minute it was tempting, but there was no way–I was having too much fun being a dad.

My wife and I have known each other since we were 18.  We married when we were 21.  She is also the one who challenged me to read the “New Testament,” obviously oblivious to the Star of David I wore around my neck at the time!  I became convinced that Jesus (Yeshua in Hebrew) is the Messiah after realizing the Jesus often characterized by the church and some church-goers is not the same Jesus as the One hidden in the Jewish scriptures and revealed in the Gospel.

Josh married a young Swiss woman, Ladina, in July (the photo was snapped just after their vows were complete). Thirty people traveled from America to Switzerland for the wedding, which was truly an awesome experience.  Josh and Ladina live in Zurich, and likely will continue to live in Switzerland for a long time.  Josh is a remarkable young man: very intelligent, hilarious, generous, and thoughtful.  I don’t think there is a single person who doesn’t like him.  I can honestly say the same thing about Ladina.  Together, they make a wonderful couple.