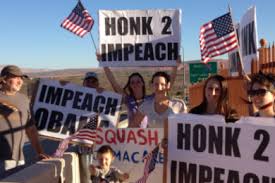 While all eyes in Washington DC are focused on the Senate’s impeachment trial of President Trump, I ask the question: How did the past president get away with all he did in the Middle East without even a hint of impeachment?

Obama’s offenses? Try one-point-eight billion dollars in cash delivered on a wooden pallets to the radical Islamist leadership of Iran for starters. Then there was Obama’s unauthorized war on Libya, which was unprovoked by any attack (or threatened attack) on the US, and unwanted by a vast majority of Americans. He also aided and abetted in the murder of Libya’s leader and in the process destabilized the country, leading to a bloodbath.  And then there was selecting the horrific Muslim Brotherhood as a partner for peace in Egypt (didn’t work), and Obama’s gross miscalculation in Syria that internal conflict could be contained within that country’s borders (it wasn’t).

The Democrats, establishment media, and even a heckuva lot of Republicans were totally silent.

This is our subject for this episode of Hidden Headlines; and my guest is investigative journalist Bill Wilson, author of the very popular Daily Jot news article.

Not only does Bill discuss Obama’s offenses in the Middle East, but he ties those shady decisions into Bible prophecy, specifically the end times prophecies found in the Jewish scriptures  of Ezekiel chapters 38 and 39. Bill’s jot is entitled, Prophetic Truth and Consequences (January 13).  In it he says,

The foreign policy of the immediate past US president engineered a destabilization in the Middle East that has resulted in great suffering of humankind as well as advancing the march of end time prophecy. Strategically, that president locked in an irreversible pathway that accelerated world events toward the Ezekiel 38 prophecy where Magog, Mesech, and Tubal (Turkey) leads Persia (Iran), Ethiopia (Sudan) and Libya (Libya) against Israel in the end of times “To take a spoil, and to take a prey (Ezekiel 38:12).” Think about the truth in Arab Spring, assassinating Libya’s head of state, promoting the Muslim Brotherhood as a foreign policy partner, and sending Iran billions of dollars in cash. Also think about the consequences.

I hope you enjoy (and share) this episode, which you can listen to here.