Mike Bloomberg – proof that “All animals are equal, but some are more equal than others.” 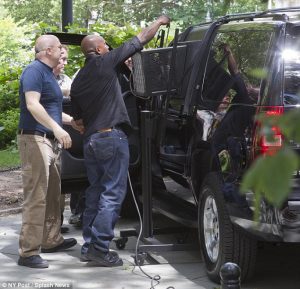 Mike Bloomberg has more baggage than United Airlines.  And I mean the type of baggage one might purchase from a street vendor working an alley in Bangladesh during your first trip to South Asia–it looks good until it’s used for the first time and then you discover it’s made of the cheapest material and assembled to hold up perfectly until tossed into cargo hold of the first plane.  After that, the zippers burst and before you know it all your dirty laundry, personal sundries and cheap chachkies have been spilled across the the luggage carrousel upon arrival at your destination.

Given that one of the lines used by the left to take a swipe at Trump is that “He’s a billionaire who bought the presidency,” isn’t it amazing that the left is giving Bloomberg a free pass for his unprecedented use of personal money to fund his campaign?

And then there are the numerous statements Bloomberg has already tried to distance himself from, many racist and sexist.  Oh, and let’s not forget the stop-and-frisk policies he enforced as Mayor of NYC. The left loathes those, but in Mike’s case it’s all forgiven and water under the bridge.

The left hates Trump so much they just want a winner, no matter how rich, insincere, and stinky.

Now here’s a doozy that has been forgotten. In an effort to appease the left, Bloomberg has always talked about global warming as if he were the greenest of them all.  However, back in 2012 he was caught on camera hooking up a portable air-conditioning unit to his huge mayoral Chevy Suburban in an effort to keep it cool while he was away from the vehicle while on official business.

New York City has some of the strictest idling laws in the United States.  Cars using AC are only able to remain stationary with their engines running for three minutes. After that you can get nailed with a hefty ticket.  Bloomberg’s workaround was caught on camera by a few tabloids, but the establishment media wouldn’t print the story. Besides the manpower required to rig up the air-conditioner, one has to understand that such a unit draws extensive energy from the grid.

Interestingly, a week before he was busted for the portable AC,  Bloomberg visited the Bronx Works Senior Centre.  Temperatures had been a muggy 90-plus for days and the Mayor called on all New Yorker’s to turn off,  “all non-essential appliances.” Bloomberg explained, “It only takes a couple of minutes to cool off a room.”

All of this proves an adage first coined by George Orwell, “All animals are equal, but some are more equal than others.”