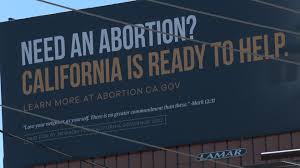 California. The state of my birth. It’s where my wife (also a native born Californian) and I were married. Our four children were all born in California. Most of my TV career and all of my radio career were accomplished in California.

In terms of geography, California is arguably the most beautiful state in the Union. The 840 mile coastline is jaw-dropping. The Sierra Nevada Mountains are wondrous. The weather provides variety unsurpassed in any state.

However, leftist politicians, who essentially run the state unopposed, have unleashed pure evil in the form of a Ballot measure to be voted on  in November.

As you are aware, back in June, the Supreme Court issued its opinion in Dobbs v. Jackson Women’s Health Organization, which overturned Roe v. Wade and returned the issue of abortion to the states. The California state legislature then voted by greater-than-two-thirds majorities in both of its houses to place a constitutional amendment on the state’s November ballot.

Proposition 1, as it is called, states the following: “The state shall not deny or interfere with an individual’s reproductive freedom in their most intimate decisions, which includes their fundamental right to choose to have an abortion and their fundamental right to choose or refuse contraceptives. This section is intended to further the constitutional right to privacy guaranteed by Section 1, and the constitutional right to not be denied equal protection guaranteed by Section 7. Nothing herein narrows or limits the right to privacy or equal protection.”

Nor does anything in the language of this proposed constitutional amendment limit abortion itself. It does not include, for example, an age limit on when an unborn child can be terminated. It states instead, as noted, that the “state shall not deny or interfere with an individual’s reproductive freedom … which includes their fundamental right to choose to have an abortion.”

In other words, this is abortion through 9-months.

The atheist communists who run the legislature tried something even worse earlier this year, which included killing a baby outside of the womb. I wrote about it, and lots of people did not believe what I was saying was true.  It was true!

That horrid plan, in my opinion, will be their next goal.

Is it any wonder I’m now a resident of another state?